After Mark passed away this year in April, our very dear friend, Nigel Burd, approached me and said he would like to put on a fund raising event in Mark’s memory for the two charities that Mark was keen to support and who had supported us during Marks illness and of course I was delighted. Nigel worked tirelessly to make this happen and on the 4th July he ran a two night fishing event over at our local lake in Crediton (Shobrooke Park owned by Dr Shelly). 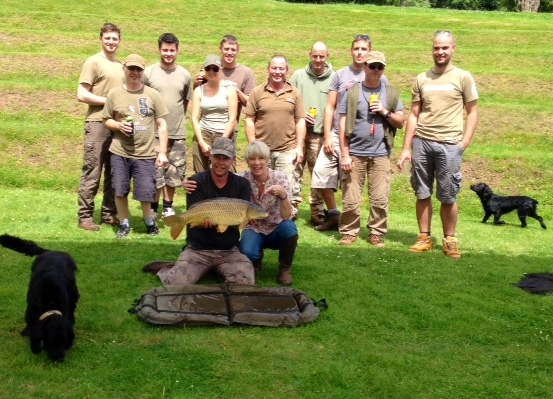 This may not sound like an unusual event but apparently there has not been any night fishing at Shobrooke for nearly 20 years making this quite a unique event. It started at 12pm on the Friday and continued on until 12pm on Sunday. Nigel and his partner Lyn also laid on a fabulous BBQ which I went along to on the Saturday.

Over 14 anglers (all members of the lake) took part and over the week-end, between them, they caught over 60 carp. While I was there I was lucky to see a 10lb carp caught by Neil McNaught (see picture). However the biggest carp was caught by Matt Davies but I’m afraid I have been asked not to give away the exact weight but needless to say it was quite a lot bigger than the one caught while I was there!

Of course the best news of all was the amount raised by all the anglers, paying to take part and friends that contributed over the week-end …….£900.

I am so grateful to Nigel and Lyn for organising this and giving me a chance to talk to the anglers about Mark and the type of cancer that he suffered from helping again to raise awareness to help others. I would also like to say thank you to all the anglers who took part, their friends who supported them and a very big thank you to Dr Jack Shelly for agreeing to allow this to happen in the first place and my good friend Joe Currie for coming with me and giving me the confidence to make the speech as it was quite an emotional subject.

The charities involved is the wonderful AAMF charity www.ammf.org.uk/, the only one that is dedicated to highlighting the type of cancer that Mark suffered from and Devon based Hospicare www.hospiscare.co.uk/ without whom I would never have been able to cope as well as I did.